This beautiful bird with its jet black plumage, orange circled eyes, legs and dagger- shaped beak has captured our attention during our walks here at the Bot River Mouth and various beaches of Hermanus, Western Cape. 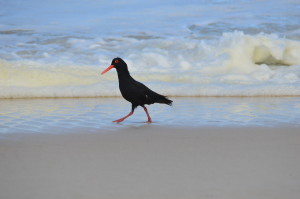 The first thing that always draws our attention to their presence while walking on the beach is the cute   unmistakable squeaky-bath-toy sound they make while flying.

It is said the African black oyster catcher mates for life and pairs have been know to live up to 20 years. Wow,what an example of loyalty. 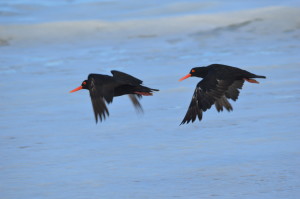 The birds that live on sandy shores eat sand mussels. 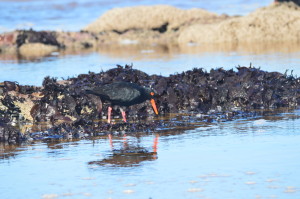 These birds have been observed to flock or form clubs during the non breeding season as a means of protection. from predators. 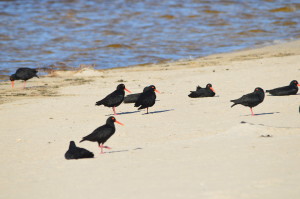 Their natural predators are foxes, jackals,genets,snakes and gulls. Holiday makers and dogs are an additional threat. Thankfully beach driving has been banned. 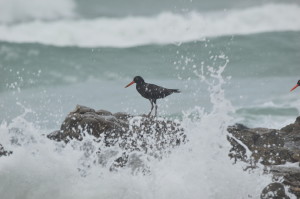 The birds that live on rocky shores are said to feed on mainly mussels and limpets and fish not oysters. 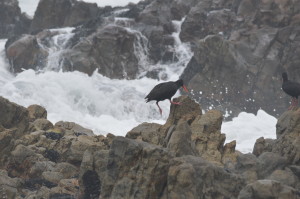 This species is now listed as “Near Threatened”

Thanks to the Oystercatcher Conservation Programme initiated by the Percy Fitzpatrick Institute of African Ornithology at the University of Cape Town, the numbers are on the rise again. 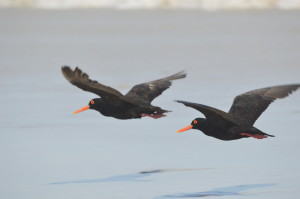 Bird lovers will enjoy observing these and many other species in their natural habitat frequenting Fisherhaven and the shores and cliff paths of Hermanus and surrounds.